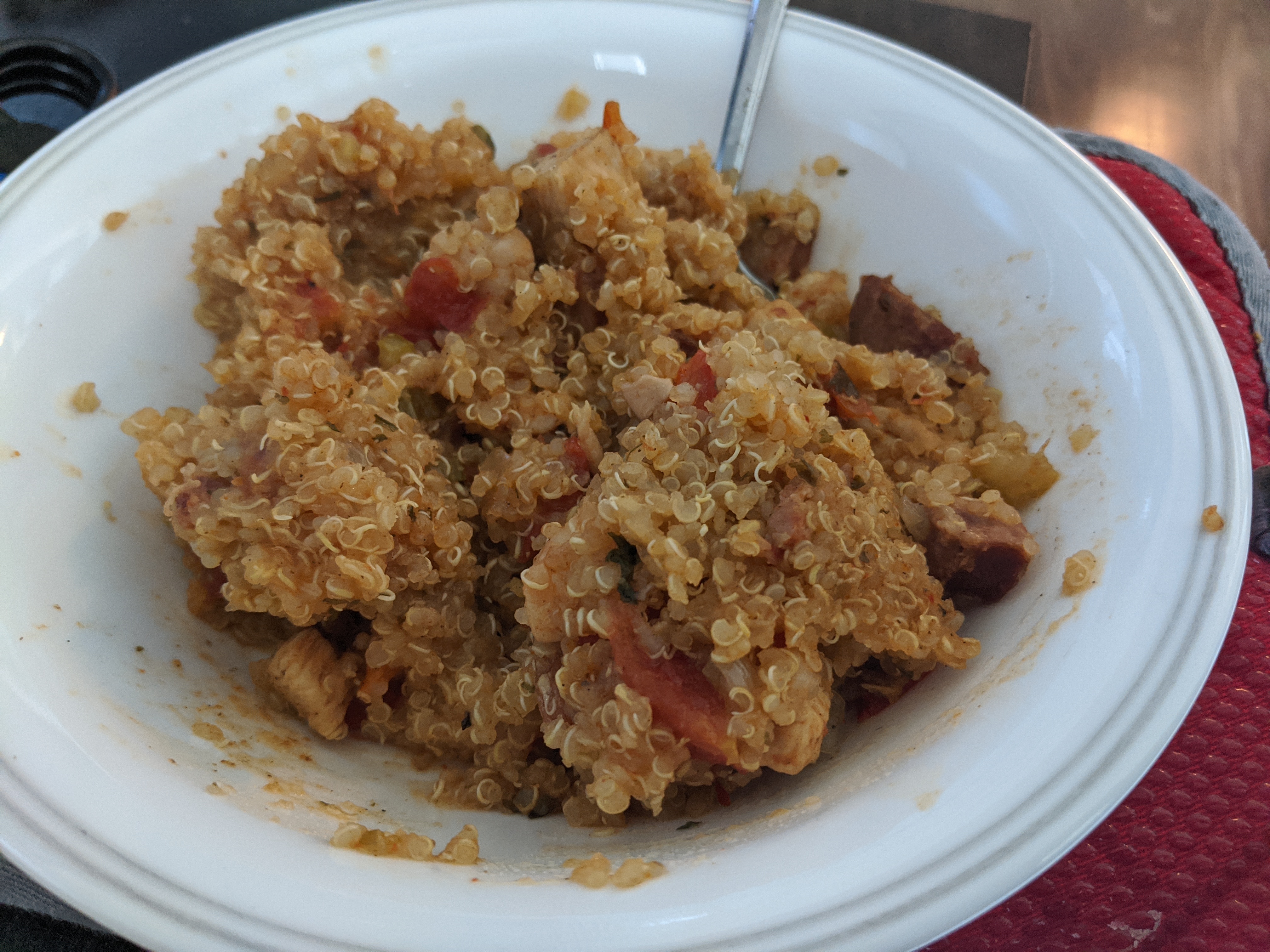 A hearty, savory creole dish with some personal modifications. The “holy trinity” of onion, celery, and bell pepper are a wonderful aromatic base and tie together a mix of pork sausage, chicken, cayenne, parsley, and thyme. A single batch provides dinners for me for a week; it actually gets better the longer it sits in the fridge as the flavors mix together. As an added bonus, your entire house smells like cajun for days!

The quinoa is extremely non-traditional, I know. I do think that quinoa’s texture and taste are an improvement over rice, but the real reason is that I react badly to carbs and the quinoa is healthier than white rice.

I’m continually having to tweak the seasoning mix based on what sausage I can find and how old my spices are, so apologies for the vague directions on that. That said, nothing is particularly precise, so just have fun!

Warning: I prefer my jambalaya extremely spicy, so you will almost certainly want to reduce the cayenne, red pepper, and chili oil. Seriously, if you don’t fix it it’ll probably mess up your digestion for a few days.

Previous attempts at the seasoning mix

Result: …Worked pretty well! Still a bit off. Not sure what to change. Could just be that I used beef sausage instead of pork.

Replicate attempt 2, but this time I found a package of what claims to be pork andouille at whole foods

Result: Worked very well! The sausage appears to have been the difference. A bit too spicy, but can fix that next time by using less pepper. There’s still something a bit off but I couldn’t quite figure it out.

Replicate 2, and I think that I found the same sausage. However, there’s only 11 oz of it to the pound that I should have, and I’m using a bit more chicken than usual (4 breasts rather than 3).

Result: …I forgot to decrease the red pepper. Dangit. Reorganizing the note to help me remember to do that. Otherwise great. :D

Messed up, didn’t realized I didn’t have enough parsley until I had already finished. Ended up using maybe 2 tsp parsley rather than 2 tbsp. Will have to repeat that attempt.

Quinoa worked well. Washed extremely thoroughly. Came out a bit soupy, but that’s okay. Will try again with a tiny bit less fluid. Spices worked well. Used the recipe amount of celery, it might have helped with the quinoa.

Gave the quinoa some time to sit after washing and slightly reduced chicken broth, which seem to have fixed the fluid. Spices worked well. I actually really like the quinoa. Definitely sticking with the celery; maybe it’s better here? I think I’m pretty much done.

Yep, this is good. Still extremely spicy, but good for me.